Signs of Whale Accumulation, but Where is Bitcoin Potentially Heading if $30K Breaks? (BTC Price Analysis)

BTC started the week with a 7% pullback, a jump in BTC Bitfinex Shorts, and uncertainty over Grayscale’s GBTC unlock. On-chain analysis detected Net Exchange Inflows and increasing Bitfinex Shorts before BTC started its latest price dump, as can be seen on the following charts: However, the good news for the bulls is that there are […] 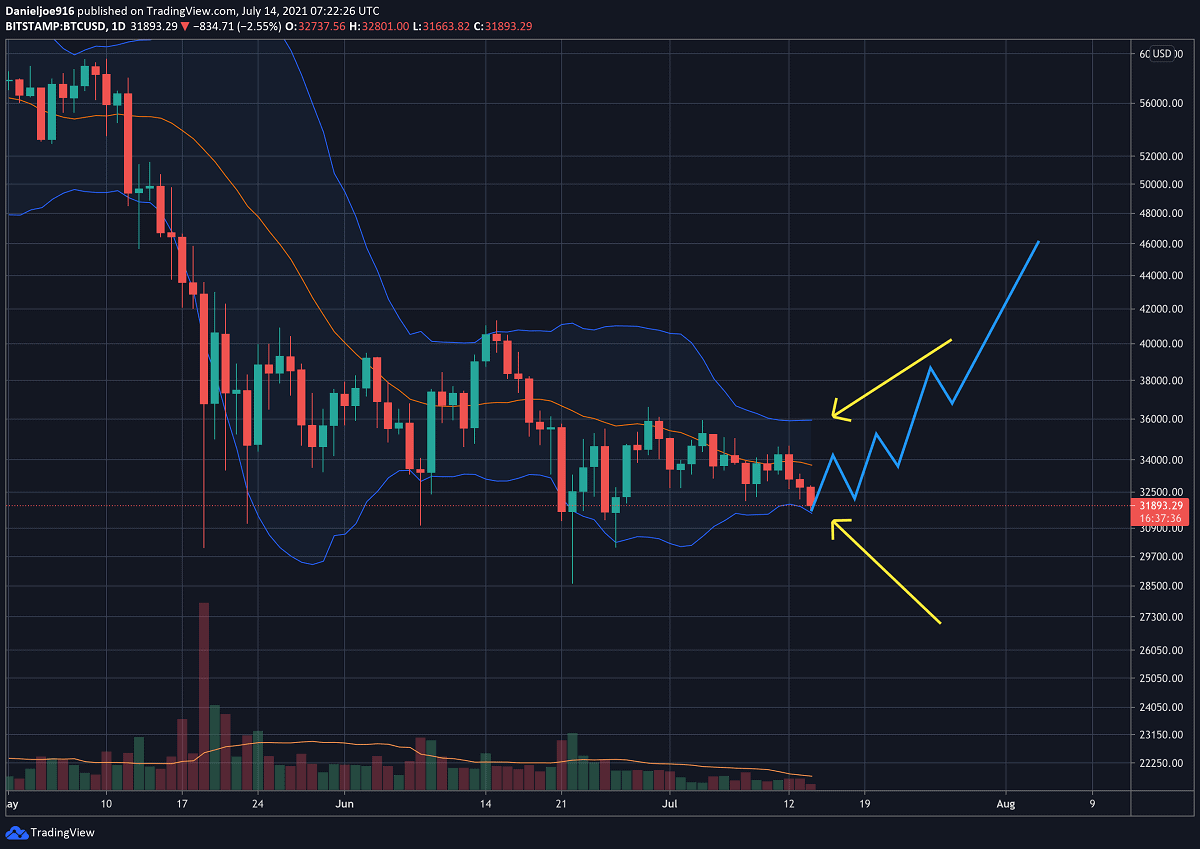 BTC started the week with a 7% pullback, a jump in BTC Bitfinex Shorts, and uncertainty over Grayscale’s GBTC unlock. On-chain analysis detected Net Exchange Inflows and increasing Bitfinex Shorts before BTC started its latest price dump, as can be seen on the following charts: BitFinex shorts accumulating before the recent BTC crash Netflows of BTC. Daily chart by CryptoQuantHowever, the good news for the bulls is that there are signs of large investors stepping in and buying BTC as Net Exchange flows registered notable outflows of thousands of BTC by the hour, as can be seen on the lower-timeframe chart below: Netflows of BTC. Hourly chart by CryptoQuantBTC Critical Support Areas To Watch Near-term support for BTC is at $32.1k, which is the low made on July 8th, 2021.  Today’s candle (Wednesday) also wicked below it, but we will have to wait for the daily close. A daily close below this level could trigger near-term risk to the downside towards the 50-week MA (currently being tested amid $31.8K), and the lows of the test in Wyckoff Accumulation at 30.1k.  As per the model, BTC must make a higher low at any price above 30.1k to maintain the bullish structure. Otherwise, it could further extend the consolidation phase or break towards $25k, or even $20k (the previous all-time high from December 2017) in another wipeout. BTC/USD, July 14As CryptoPotato reported, the technicals are pointing to a very large move coming for BTC:  The Bollinger Bands, a technical indicator that measures price moves in standard deviations relative to an SMA has been “squeezing”.  The squeezing of the upper and lower band usually occurs before a massive move in price. Bollinger BandsThe last time this happened was in October 2020, when BTC was trading around $10k to $11k.  The Bollinger Bands Squeezed and ignited a massive breakout sending BTC from $10k to $40k in 3 months. So far, according to the model, every drawn down since the spring and test in Phase C has registered lower aggregate volume – a sign of supply exhaustion. Starting from the spring lows, aggregate volume came in at $17.58B, $9.25B, $6.32B, and intraday so far at $1.5B.  On-chain analysts believe a supply shock is coming for BTC as soon as the remaining sellers capitulate, leading to a significant rally to the upside once new whales enter the market. Third Largest BTC Whale adds to BTC Holdings During Dip Despite the bearish sentiment in the market, whales continue to accumulate quietly.  Just overnight, a BTC whale with the third-largest wallet added 122 BTC ($3.9 million), increasing total holdings of BTC to 116,122 BTC worth $3.7 billion. Interestingly, this whale group had been adding bitcoins over the past two months, around the $30-31K support mark. This could be one of the reasons that the latter level has held without breaking down since May-19 (as of writing these lines). BTC third-largest whale is accumulating. Data by Bitinfocharts  In conclusion, BTC’s price is now testing major support at the 50-week MA, and the lower part of the 2-month long trading range between $30K and $42K. Whether BTC can hold support and start breaking out to the upside out of the trading range, remains to be seen.  Bullish on-chain metrics suggest a breakout is coming as soon as the supply is fully exhausted.

LaneAxis: How Blockchain is Fixing the Flaws in Freight Transportation

After F1: CryptoCom Becomes an Official Partner of the...

Bitcoin Price Analysis: These Signs Point To an Incoming...

Binance completed another quarterly burn of BNB. This time, however, the price failed...

Living in the Age of Aquarius with Matt Welsh

What is the Age of Aquarius? Orlando-based musician and yogi Matt Welsh believes...

Study: Bitcoin and Dogecoin are the First Investment for...

Almost half of the young Brits choose the crypto market as the first investment...

LaneAxis: How Blockchain is Fixing the Flaws in Freight...

[Featured Content] As the world moves swiftly towards urbanization among global...

Mysterious Bitcoin Whale Who Sold at $60K Bought Over 17K...

Following a second exploit in 9 days, over 14 tokens listed on the ChainSwap bridge...

The total number of crypto users has doubled during the first six months of 2021,...

PayPal's CEO Dan Schulman announced that a new "super app wallet" is on its way...