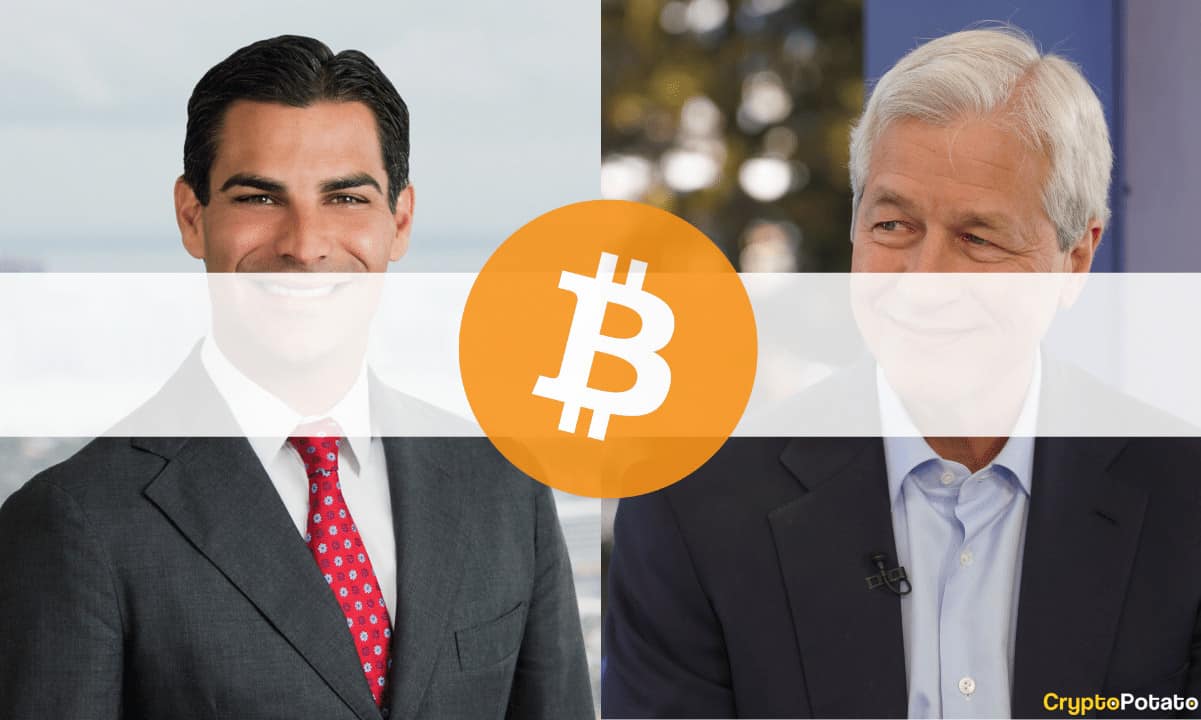 Francis Suarez strongly disagreed with Jamie Dimon’s opinion that bitcoin is “worthless.” The primary cryptocurrency has intrinsic value, while its underlying blockchain technology is “the most secure, most decentralized blockchain on the planet,” the Mayor said. Suarez Vs. Dimon Miami’s Mayor – Francis Suarez – and JPMorgan Chase’s CEO – Jamie Dimon – are, by all means, in the opposite corners when opining about the merits of bitcoin. While the top politician is one of the biggest proponents of the leading digital asset, the latter often shouts out phrases like “Stay away from bitcoin,” “Bitcoin is the fool’s gold of the future,” or his most recent one – “Bitcoin is worthless.” In a recent appearance at “Varney & Co.,” Suarez explained why Dimon is wrong. He asserted that bitcoin is “definitely not worthless,” pointing out that its USD value is over $50,000. Being bullish as usual, Miami’s Mayor predicted that in the future, the digital asset “has only one way to go but up.” According to the politician, bitcoin creates excitement among some investors as it is not tied to the fiat system or the monetary policy. Thus, it is no wonder why developing nations across the globe with shuttered economies have turned their sights towards the cryptocurrency: “There is also a wave of countries in Central America, South America, and in Africa that start to adopt bitcoin as a base currency and that could revolutionize the utility of bitcoin.” It is worth noting that Suarez is not only a BTC supporter but also a HODLer. In June, he admitted he entered the cryptocurrency market by making a personal investment in both Bitcoin and Ethereum. Subsequently, last month, Miami’s Mayor said his administration is working on enabling the city residents to pay their taxes in BTC. “We want to do it with bitcoin because it’s what we know and what we trust. We think it’s the most verifiable and most trustworthy network out there,” he concluded. Francis Suarez, Source: Bloomberg How Is MiamiCoin Doing? Launched in August this year by crypto developer CityCoins Inc., MiamiCoin is a new digital asset that aims to generate interest in the city’s municipal projects. Just like bitcoin, it is decentralized and works under the proof-of-work algorithm. However, when successfully mined, 30% of the reward goes to a digital wallet for the city of Miami, as Francis Suarez explained. He added that during its more than two months of existence, the asset has brought in $16.5 million: “In the case of bitcoin, the reward would have gone 100% to the miner, in the case of MiamiCoin 30% of it goes to a digital wallet for the city and that has generated in 75 days $16.5 million.”

Cambridge Data: The US Has Become the Leader for Bitcoin Hash Rate