Tesla's CEO laid out his thoughts on what money is in a Twitter conversation with Peter Schiff. He also said that BTC and ETH prices 'seem' high. 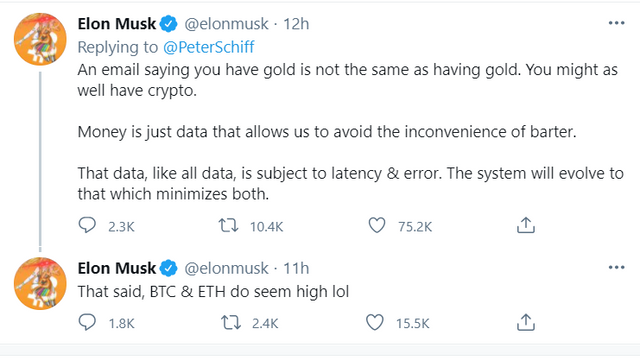 Bitcoin recently became a trillion-dollar asset as its price also surged past $57,000. A few hours later, ETH made headlines as it crossed the coveted $2K mark. Several other cryptocurrencies have also performed well. Tesla’s CEO, Elon Musk, is of the opinion that the prices of both digital currencies are high. Elon Musk Engages Renowned Gold Advocate, Peter Schiff Pro-gold and anti-bitcoin economist Peter Schiff is at it again. The chairman of Schiff Gold is renowned for his relentless anti-bitcoin tweets. He once termed bitcoin “the biggest bubble ever.” In his latest episode, he referenced Elon Musk’s recent tweet where the Tesla CEO said that bitcoin was almost as bad as fiat.  Schiff asserted that BTC is worse than fiat currencies. He rounded off by saying that gold is a better option than both bitcoin and fiat. In response, Elon Musk elaborated that money is data that enables people to avoid the “latency of barter.” He later suggested that the prices of leading cryptocurrencies, bitcoin, and ether ‘seem’ high. Bitcoin price has surged by 190% since the beginning of December 2020. ETH’s rise has also been nothing short of phenomenal. It has gained over 240% in the same period. An email saying you have gold is not the same as having gold. You might as well have crypto. Money is just data that allows us to avoid the inconvenience of barter. That data, like all data, is subject to latency & error. The system will evolve to that which minimizes both. — Elon Musk (@elonmusk) February 20, 2021 Elon Musk’s Tesla has also benefitted from the Bitcoin rally. Reports claim that the electric vehicle company has made more profit from its $1.5 billion bitcoin investment than it did selling cars in 2020. Is A Market Correction Looming? Many in the cryptocurrency community are wary about the current developments in bitcoin’s price, having endured a grave bear market following the surge in 2017. However, it’s also worth noting that comparing both situations is unlikely to yield any fruition. Back in 2017, the price explosions were arguably caused by retail euphoria. And while retail investors are undoubtedly already in the current market dynamics, there’s a huge differentiator – institutions. It’s impossible to disregard the fact that many companies, including publicly listed ones and even Tesla (an S&P500 company), have put Bitcoin on their balance sheet. We saw an influx of hedge funds dive into the cryptocurrency as means of battling inflation amid infinite money printing following the COVID-19 crisis. With this, many proponents believe that BTC is actually still underpriced, given that the current demand for it heavily outweighs the already limited supply.

Bitcoin price surged by a total of 5% over the past 24 hours, as the coin finally...